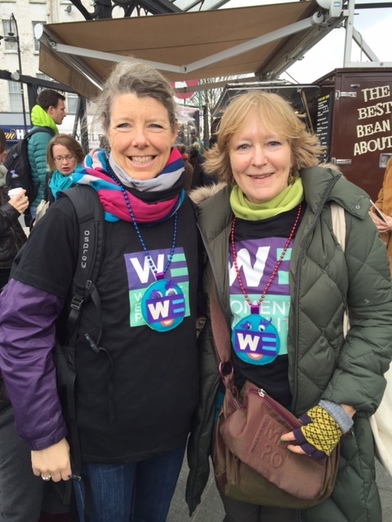 Alison Marshall (left) & Mel Howard on the campaign trail
Women’s Equality Party candidates from Highbury Fields tennis aim to play a blinder on 5th May.
In conversation with Caroline Griffiths

Is it a coincidence or is there something in the air in our part of London? The Highbury Fields tennis community boasts two out of the ten candidates standing for the Women’s Equality Party for the Greater London Assembly elections on 5th May 2016. Melanie Howard, formerly of the Highbury 2nd Ladies team and now a reserve in the 3rds, and Alison Marshall, a regular mixed doubles player and tournament participant were selected by Women’s Equality Party members in London. The Party is also taking a shot at the leadership by standing a candidate for Mayor: Sophie Walker. Formed by comedienne Sandi Toksvig and journalist Catherine Mayer a year ago, the party already has 72 branches and over 45,000 members nationally.

This week Djokovic said male tennis players deserve bigger prizes as they sell more tickets - do you agree?
Alison said "I agree with Serena Williams who pointed out that the US Open women's final sold out before the men's last year and who characterised Djokovic's comments as a disservice to women." Melanie added, “As a Trustee of Women in Sport I have been studying the structural barriers to girls and women getting enough exercise to contribute to their health and the bias in the sports world towards men and football in terms of coverage and pay. It is a real shame that in tennis where real progress has made (and Highbury now boasts 5 women’s teams) that we are hearing such retrograde thinking emerging now.”

Why are you running for the GLA?
The aim of the Women's Equality (WE) Party is to ensure that inequality and women’s continuing disadvantage in economic and political terms is addressed seriously by the mainstream parties. Our approach is to work with anyone, blue, red, yellow or green who wants to accelerate positive change for equality. There has been progress, but 45 years after the Equal Pay Act women still earn 20% less than men and despite the spin, women are seriously under-represented in senior positions and government.
"We both do a lot of running on court, but WE are more interested in 100 women advancing one step than one women taking 100 steps, which is how much has been achieved in the past" said Melanie.

Are you standing to represent this area?
We are standing for the London-wide list (the third, orange ballot paper you'll get on 5th May) because the way the votes are counted means that small Parties have a real chance of winning a seat in this section. We need a 5% slice of the overall vote in London us to win a GLA seat so WE can hold the mayor to account for action on equality so we hope you'll vote for us on 5th May.
"We want to serve all of London but we're really proud of Highbury: it's an especially progressive area - the Hackney and Islington Women's Equality Party branch is the largest in the country!" added Alison.

How's the campaign going?
The competition is stiff but we're getting an enthusiastic response on the doorstep when we're out canvassing. Londoners understand the importance of making flexible working a reality, of making public transport safer at night, of increasing support for carers and for entrepreneurs, of stopping violence against women and girls.
“As tennis players we all know that the underdog can get a long way with guts and determination and this applies to our campaign – we are subjecting the competition to intense volleys where we can.” Said Alison.

So what do you want club members to do?
Game: it'd be ace if you'd join us at http://www.womensequality.org.uk/
Set: please help spread the word and get the Women’s Equality message out to as many people as possible. Although we are the fastest growing political party in Great Britain many people don't realise that we have candidates for the May elections.
Match: please vote for the Women's Equality Party on 5th May. You get a first and a second choice vote for Mayor so please be tactical and consider giving one vote to us. Then on the orange ballot paper please choose WE as this is our best chance of getting a GLA seat.
Powered by